Showing posts from 2012
Show all

The More the Merrier 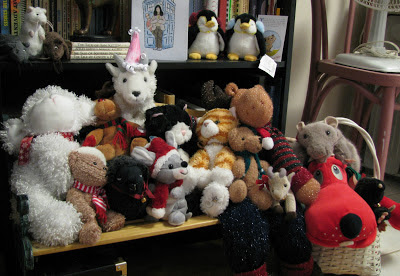 Friday December 07, 2012 Steve and I have a lot of stuffed animals in our apartment. Some of them are from my childhood, but many are much newer than that. They are spread around the place, perched on shelves and lounging on the back of the couch. There's even a Remy the Rat in the kitchen.  But several of our stuffed animals spend their days sitting together on a small bench in the living room. And yes, ours is an adults-and-cats only home. So the other day we realize December has snuck up on us. We respond the only way we know how, by decorating. Among the other things I get out of the Christmas chest are the holiday-themed stuffed animals we've carefully packed away. We're quickly running out of places to put things, and so I say: "We could pack away the guys on the bench, and put the Christmas animals there." Steve immediately agrees, but then we both look at the bench. Neither one of us moves. Finally I say: "How lame is it that I feel bad a
Post a Comment
Keep reading »

There's Something About Angus 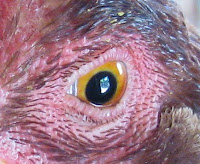 Monday August 13, 2012 In which I ramble about animation choices, a topic on which I have absolutely zero expertise.  (If you already know all about using white rims to humanize the eyes of drawn animals, you may want to skip down to the "But What About Angus?" section.) [I took the photos in this post; all images from Disney films were available on the official movie download and gallery pages available at Disney.go.com/brave , Disney.go.com/up ,and Disney.go.com/tangled   Some images have been cropped for commentary purposes.] Why? Chicken eye. The first time I saw Disney Pixar's Brave , I paid a lot of attention to the way the animals' eyes were animated.  If you've seen the movie, you probably noticed it too, although you may not have noticed yourself noticing it. The thing is, in real life you don't see much of the whites (or sclera ) of many animals' eyes, unless they are looking sideways or are angry/scared/upset.  Yet cartoonishly ani
Post a Comment
Keep reading » 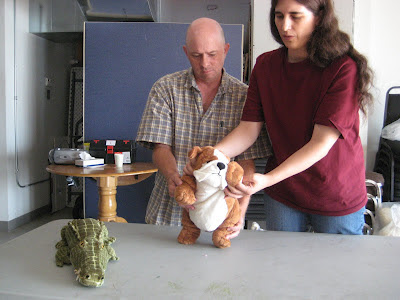 Friday August 10, 2012 When I was a kid, my mom would often spend part of her summers taking classes to increase her skills and qualifications as a teacher (and later as a teacher-librarian). I always respected that, and have grown up to be a big fan of the idea of lifelong learning.  Now that I'm an adult (or so I'm told), my problem is that I have multiple careers on the go, and none of them have a clear continuing-education path.  I'm constantly coming across classes and workshops of interest, but with a split focus and limited budget, I rarely* sign up for any of them. Well, last weekend Steve and I finally took the plunge and committed to learning some new skills.  So, with all those choices, what did I go with?  Here's a hint: "O, pardon me thou bleeding piece of earth..." Then there was this: Somebody needs to pull on his butt...  And also this: Quite the baby.  And quite the babysitter. Above photos all courtesy of Mike P
2 comments
Keep reading » 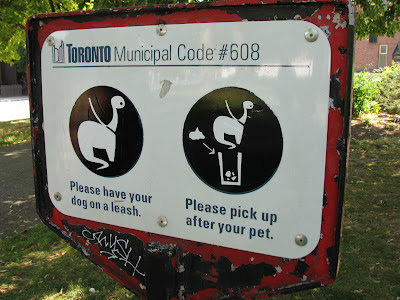 Saturday July 28, 2012 Toronto is a very clean city.  We always scoop our dino poop. Things get kinda crazy in the off-leash park.   (As seen in Allan Gardens).
Post a Comment
Keep reading »

Saturday June 2, 2012 While poking around on IMDB a few weeks ago, I learned that actress Kathryn Joosten, who I loved as Mrs. Landingham on The West Wing , didn't begin pursuing acting until her 40s.  The change of direction in her life only came about after Joosten, then a psychiatric nurse and a mother of two, divorced her alcoholic husband.  As it says in the biography section of her official website : "Kathryn never forgot the anger and bitterness her mother expressed on her death bed for having put aside dreams and plans for the future that would never be.  After a few successes at Community Theater, Kathryn decided to see if she could follow her dream."   Along with beating the odds by having a late-start acting career that earned her two Emmys, Joosten also began a battle with lung cancer in 2001 which she only just lost today . I'm not a big follower of celebrity news, because most of the time I think the wrong stories get the most traction.  Ka
Post a Comment
Keep reading »

Tuesday May 8, 2012 Several years ago I started reading Every Day Fiction , a website which posts a new piece of flash fiction, well, every day.  EDF defines flash fiction as stories which are 1000 words or less, so reading it is a fun way to constantly sample a variety of voices and ideas with a low time commitment.  As a result, over the years I've collected links to what I think are some great examples of flash fiction. EDF has released several "best of" print anthologies of their own. Now obviously what makes for good flash fiction is a matter of taste, and I'm sure plenty of people will disagree with my picks (be warned, I have a particular affection for anything silly, or involving animals).  But fantastic finds are always made more fantastic by the sharing, so I'm going to start emptying my "Favourite Fiction" bookmarks folder out on this blog, a few links at a time. My Favourite Flash Fiction, Vol. 1 Frankenstein's Monsters by
Post a Comment
Keep reading » 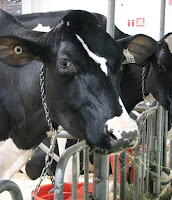 Monday May 7, 2012 Mini who? I ordered business cards once before. It was just before a trip to Calgary, when I was going to see All the Light-Hearted Souls produced. Business cards seemed like a thing to have for my first ever "business trip", so I had a box of two-colour, text-only cards made up (Steve and I also handmade some illustrated minibooks out of a narrative poem, but that's another story). I think I gave out maybe four cards, and have given out another dozen or so since.  But now the URL is out of date, and the cards have been relegated to the scrap paper section of my storage closet (where they've proved surprisingly useful). It was time for something new.  New, up-to-date, and actually likeable. Enter Moo Cards. The spread. I first came across Moo.com years ago, and have kept them in mind ever since. For now, I opted for Minicards, which are half the size of a regular business card.  One of the great things about Moo Cards i
Post a Comment
Keep reading »

Nature Webcams - A Most Educational and Addictive Distraction 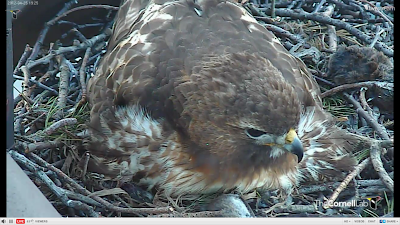 Saturday May 5, 2012 So one of the things which slightly hampered my Script Frenzy progress during April was this: And this: And especially this: Those are screen captures* from when I was watching the Cornell Lab of Ornithology's Red-tailed Hawks nest webcam .  There's a also a live feed from a Great Blue Heron nest webcam , but I haven't managed to get any real good screen captures from that yet. Here instead is a short video video Cornell posted of one of the herons hatching: I managed to stumble onto the times when the three hawk eggs were hatching (which were each a day apart!) and I found it very hard not to constantly check in for any progress. If you're at all interested in birds or nature in general, I highly recommend checking in with these nests over the next few weeks as the young birds grow (just be prepared for a little bit of gore - circle of life, and all). You can learn a lot just by watching, and also by reading and as
Post a Comment
Keep reading »

Script Frenzy: Just Under the Wire 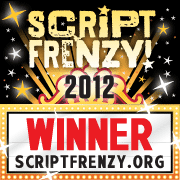 Monday April 30, 2012 The question is, if I can write 60 pages in a day, why aren't I writing three scripts a week?
Post a Comment
Keep reading » 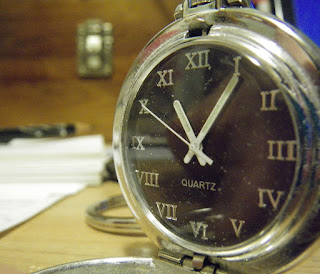 Saturday April 28, 2012 Well, after announcing over a month ago that I was: A) Going to participate in Script Frenzy 2012 during the month of April and B) Planning to blog about my progress I figured it was about time I started doing those things. Off to a Very Late Start Eleventh hour, anyone? Although I wrote three and a half pages on the first day of April, I quickly realized I didn't know nearly enough about my characters or my plot to be writing yet.  I'm not a meticulous planner, but I do like to start with a rough outline, at least in my head, of both the sequence of events and the arc of each character. On April 1st, I had none of those things. So I continued pondering my script idea, doing research and taking notes, and telling myself that very soon I should get back around to the actual writing. Yesterday, on the 27th of April, I finally went back to creating actual script pages. Now, with two days left in the month, I've written a grand
Post a Comment
Keep reading »

Another Year, Another Frenzy

Saturday March 24, 2012 Taking place every April, Script Frenzy is an online event that challenges writers to hunker down and, in just thirty days, hammer out 100 new script pages for any medium - film, television, web series, stage play, radio play, or graphic novel. After first wanting to take part in Script Frenzy in 2004, I finally dove in last year and succeeded in writing 100 new script pages during April 2011 by completing several short stage plays. Now, that's a perfectly valid Script Frenzy "win", but it still didn't feel quite right.  I like the idea of using Script Frenzy to write a complete first draft of something which will run at least 100 pages, and finishing that first draft during April, no matter how many more pages it takes. So That's the Plan for This Year I wasn't thinking about Script Frenzy when a new screenplay idea started tumbling around in my brain in late February, but once I started seeing writers on Twitter men
Post a Comment
Keep reading »
More posts