Showing posts from March, 2018
Show all

Gearing Up for Camp NaNoWriMo 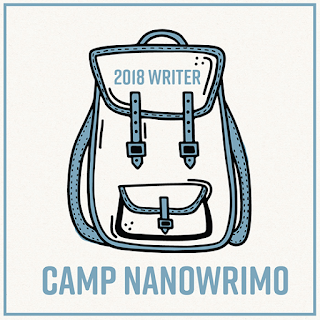 Come April, I'll be participating in Camp NaNoWriMo, a month-long writing challenge where you create your own definition of success. It's the more flexible cousin of November's National Novel Writing Month, where all participants are trying to write 50,000 words in those 30 days. I've twice "won" at NaNoWriMo (and once at the now defunct Script Frenzy challenge), but that was over a decade ago. For my first time at camp, my whole goal is based on writing hours rather than word count or even a particular project. I've never been someone who wrote everyday, but in the past few years my writing sessions have become more sporadic than ever. So I'm going to Camp with the goal of creating new habits which I hope will last long after the month is over. Want to set your own writing goal for April and have some online friends to cheer you on? There's still time to sign up for camp !
Post a Comment
Keep reading »

On Stretch Goals and Goose Buttons

So if you follow me on any social media, you probably already know that Volume 5 of the Toronto Comics Anthology Osgoode as Gold  is currently on Kickstarter. The campaign video even includes a shout-out from co-editor Megan Purdy for the story I wrote, "The Goosefighter", which has art by Austen Payne: "The Goosefighter" is a Western-inspired tale about a young woman whose day is ruined by a territorial Canada goose on the York University campus. It is one of 27 new Toronto-set short comics that fill the 220 full colour pages of this collection. Cover by Irma Kniivila As I write this, the Kickstarter is at just under $6000 raised out of an original $15,000 goal, with the rest of the month to go. I've been rather casually posting about it as a great way to support the T oronto Comix Press and the creators by pre-ordering your physical or PDF copy of the book. But today - TODAY - they announced the stretch goals. (If you're not familiar with c
Post a Comment
Keep reading »
More posts